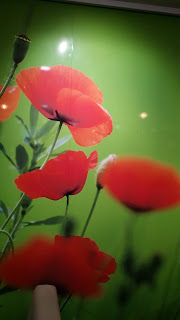 They had a family of 5 sons, and 2 served in World War I.  Only one returned.

Embarked Melbourne 7 April 1916 aboard HMAT Wiltshire
Died 3 May 1917 from a bullet wound to the head, just after capturing the first line at Bullecourt and was buried later where he fell.  Previously reported missing by AIF Headquarters on 6 December 1917 David is buried at Villiers-Bretonneux

David John Whitchurch   S/N 4275  21st Battalion 10th Reinforcements
David served in Abissinia and Egypt. He was charged for neglecting to obey standing orders without a pass at Larkhill and docked 35 days pay.    He was in France, in Etaples, Rouen, and admitted to hospital with mumps.  He was reported missing in action on 3rd May 1917, later changed to killed.
David was first diagnosed with "mumps" on 17th September 1916, he contracted the disease in London on 12th September 1916.   Died 3rd May 1917

ON REMEMBRANCE Day, Templestowe’s Denise Mitchell will quietly reflect on the sacrifices her family made during the two world wars.

She knew her father Keith had served in World War II, and her grandfather Joseph Leslie Kinniburgh served with the navy in both wars, but researching her family history revealed so much more.
“I knew my grandfather was on the HMAS Sydney in World War I, but I was surprised to find out about his heroic actions in the Sydney-Emden Battle,” Mrs Mitchell said.

Mrs Mitchell said her grandfather was one of several men severely injured during the battle, and one of two men credited with saving the HMAS Sydney.

Reports show that a gun manned by Mr Kinniburgh and another was damaged by the enemy. The quick-thinking men threw the explosive cordite overboard before it ignited, but both suffered severe burns.

“He was taken to Colombo to recover and came home to Mildura for a reception and to receive the Distinguished Service Medal, but he only had 14 days of leave before returning to the war,” Mrs Mitchell said.


“He also went to World War II with my father, but when we were going through the records we discovered he changed his birth date so he was young enough to be accepted.” [1] 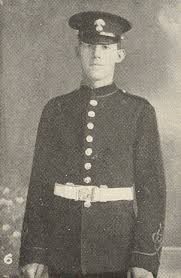 Was it ‘lambs to the slaughter’ or ‘baptism by fire’? George Cobden Bradshaw would find out soon enough. George had a deep sense of duty and the promise of adventure in far-off lands had fired him up to enlist. On the 26 August 1914 at Pontville George enlisted with the rank of Gunner in the 1st Division, 3rd Field Artillery Brigade, 9th Battery.

George was a farmer but he had served with the  Derwent Infantry for 2 years before transferring to the R.A.G.A. for another 2½ years.1 He found that the infantry was not for him and it was the thrill of firing the big guns that he enjoyed.

The Great War did not turn out to be the adventure of a lifetime that George first imagined it to be.
On the day George took his attestation oath at Pontville his younger brother Roy enlisted. Roy was
a hairdresser and was assigned to the 1st Division, 12th Battalion ‘B’ Company, 3rd Infantry as a
private.

The two Bradshaw brothers embarked from Hobart on 20 October 1914 on board the transport SS
Geelong for Egypt. Their adventure had began but they would be going their separate ways once
they landed. The 1st Division arrived in Egypt in December and began training at Mena, near Cairo
within the sight of the great pyramids. George was quickly promoted to acting Bombardier and then
to Bombardier on 17 January 2015.

By 23 July 1916 the 1st Division joined the Somme offensive. The fight for the town of Pozieres
was a memory that George would find hard to forget. They were under continuous heavy artillery
fire. By the time the Division withdrew 4 days later they had lost 5285 officers and men. The
second fight for Pozieres followed in August. George received a severe gunshot wound to the face
and right eye on 7 August. He was admitted to the 13th Stationary Hospital at Boulogne.

By late September George rejoined his unit in the field but within 2 months he was transferred by
ambulance train (AT29) to embark on the “Asturias” for England and the 2nd Southern General
Hospital with a sprained back. George spent time in England on furlough and repatriation until
March. George was attached for duty with Administration Headquarters London for election
purposes. George would not return to the war in Europe.

On 20 December 19179 George returned to Australia on the A54 “Runic”. Sgt George Cobden
Bradshaw SERN1956 was discharged from the A.I.F. on 18 March 1918 for medical unfitness with
mitral disease.10 He was an original of the first A.I.F., landed at Gallipoli 25 April, was wounded 4
times, took part in the Somme and the battle of Pozieres on the Western Front.

It is in the words of Graeme E Petterwood11 that we get a glimpse of what George must have felt in
his role as gunner in the artillery.

The ‘rush’ that came with my first live firing is now a memory - a bright flash of sight, sound and smell that will stay with me forever - but then, over the years, after the physical process of being educated as a ‘gunner’ had long been completed, I found that my involvement had become more than just a string of memories, it had become a deep-seated emotion that brought with it an appreciation of just what it constituted to be a member of a corps with a proud history of service to this nation!
With that appreciation also came the obligation to never let that history be forgotten!

George was the first to admit that The Great War did not turnout to be the adventure, he and his brother Roy, first thought it would be.12 The war would be a lasting memory and the innocence of
youth now gone.

George spent 2 years as a civilian before his deep sense of duty urged him to join the Naval Guard Section in Freemantle WA in 192013. George served in the Navy until 1945 and retired with
the rank of Sergeant 2nd Class14.
George was my 1st cousin twice removed..

Keith Oscar Bradshaw was born on 28 April 1923 in Broken Hill, New South Wales. He was the second child of Oscar Spelman Bradshaw, a railway car examiner and grocer, and Margaret, née Warburton. The family moved to Sydney in 1930. Keith was a student at Randwick Intermediate High School from 1934 to 1938, and attended Sydney Boys High School from 1939 to 1940.

After leaving school he worked as a production clerk at Wallis Knitting Mills, Sydney. In 1942 Bradshaw enlisted in the Royal Australian Air Force, serving in the United Kingdom as a wireless operator and air gunner, before his demobilisation in early 1946. Under a war service scheme he undertook a year of university qualifying training at Sydney Technical College. He studied arts subjects at the University of Sydney during 1947, but soon moved into employment.

He soon took advantage of the greater variety of positions in the department, particularly in the expanding committee system. He served as private secretary to the President of the Senate in 1953 and 1954, under a scheme whereby Senate departmental officers were attached to the personal staff of Presidents. For over a year he served as Ministerial Liaison Officer, a position occupied by a Senate Department officer which provided procedural advice to the Leader of the Government and the ministry in the Senate, as well as assistance in programming government business in the chamber. Between 1956 and 1964 he was Usher of the Black Rod, organising openings of Parliament and other ceremonies while performing the committee tasks associated with that position.

From 1956 to 1959 he was the secretary to the Joint Committee on Constitutional Review. The appointment of this committee reflected a common belief that revisions of the Australian Constitution were required, particularly in relation to the powers of the two houses. The report of the committee was not unanimous, and nothing came of it, but it exercised Bradshaw’s extensive knowledge of the Constitution, especially in its parliamentary aspects.

From 1959 until 1965 Bradshaw acted as secretary to the Joint Committee on Foreign Affairs, which was established by the Menzies Government to provide parliamentary input and consultation on foreign relations, particularly in the context of Australia maintaining its own foreign policy independent of that of the United Kingdom.

He was secretary to the Senate Select Committee on the Encouragement of Australian Productions for Television from 1962 to 1963, part of the extension of the Senate’s committee activities. The appointment of the committee reflected a concern about the relatively new medium of television being dominated by foreign productions, and attracted a great deal of interest. As a result of this and other Senate select committees in the 1960s, dealing with a large number of public submissions and conducting public hearings around the country became the norm for Senate committee inquiries.
Bradshaw’s most significant committee assignment was from 1967 to 1971 as secretary to the Senate Select Committee on Off-shore Petroleum Resources, which grappled with the difficult legal and technical issues involved in the regulation of offshore oil exploration and recovery.

The committee presented two complex reports on the subject. Each of the major committees he served paid tribute to Bradshaw’s valuable work, referring to his ability and untiring devotion to his ‘voluminous duties’, and to his ‘outstanding assistance’. Following a parliamentary delegation to Papua New Guinea in 1964, he stayed on for a time as adviser to the newly established local Legislative Assembly.

After serving as Clerk Assistant from 1965 to 1973 and First Clerk Assistant from 1973, Bradshaw was promoted to Deputy Clerk on 11 September 1979 and Clerk on 29 October 1980. His assumption of the office of Clerk occurred before the departure of his predecessor, who was placed on the unattached list (not formally retired, but not occupying the position) before his retirement in 1981. Bradshaw took retirement, under new legislation allowing public servants to retire at any time after the age of fifty-five, on 15 July 1982.
On 4 October 1948, at St John’s Church of England, Canberra, he had married Una Esther, née Studman, and they had two children. After the dissolution of that marriage, he married Sylvia Marie Evelyn Wells at the Registry Office, Canberra, on 20 March 1976.

Bradshaw was noted for his distinguished appearance, dignified manner and careful speech. The use of correct English was something of a preoccupation with him. He was happy to bear the surname of the great seventeenth century champion of the parliamentary cause, John Bradshaw, but added that, unlike his namesake, he had no wish to terminate the monarch or the monarchy! He was appointed an Officer of the Order of the British Empire in 1982.

On his retirement, the President of the Senate Senator (later Sir) Harold Young, stated:

Altogether Mr Bradshaw has served for some 32 years in this chamber. During that time he has seen many changes take place and has made a great contribution not only to the Senate but also to the Australian parliamentary institution itself. On a personal note, I thank him very much for the kindness he has extended to me since I became President of this chamber … He has a very gentle and friendly manner and one which attracts people to him.[3]

Keith Bradshaw passed away on 2 February 2017. He was survived by his wife, Sylvia and his children, step children and grandchildren.