7. Joshua Peck and the Exeter Assizes

Joshua Peck and the Exeter Assizes

The year previously, 1785, Edward Westlake was tried, along with his brother in law and father in law, Noah and John Mortimer. 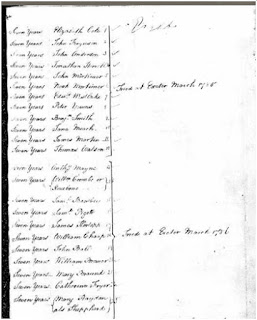 Mary Braund faced trial in Exeter in 1786, there is no mention of Joshua Peck on this record, however his record is as follows:

John Graves Simcoe (25 February 1752 – 26 October 1806) was a British Army general and the first lieutenant governor of Upper Canada from 1791 until 1796 in southern Ontario and the watersheds of Georgian Bay and Lake Superior. He founded York (now Toronto) and was instrumental in introducing institutions such as courts of law, trial by jury, English common law, and freehold land tenure, and also in the abolition of slavery in Canada.

His long-term goal was the development of Upper Canada (Ontario) as a model community built on aristocratic and conservative principles, designed to demonstrate the superiority of those principles to the republicanism and democracy of the United States. His energetic efforts were only partially successful in establishing a local gentry, a thriving Church of England, and an anti-American coalition with select Indigenous nations. He is seen by many Canadians as a founding figure in Canadian history, especially by those in Southern Ontario. He is commemorated in Toronto with Simcoe Day.

Simcoe was the only surviving son of Cornishman John (1710–1759) and Katherine Simcoe (d. 1767). His parents had four children, but he was the only one to live past childhood; Percy drowned in 1764, while Paulet William and John William died as infants. His father was a captain in the Royal Navy who commanded the 60-gun HMS Pembroke during the Siege of Louisbourg (1758), with James Cook as his sailing master. He died of pneumonia on 15 May 1759 on board his ship in the mouth of the Saint Lawrence River a few months prior to the siege of Quebec, and was buried at sea.[4] The family then moved to his mother's parental home in Exeter. His paternal grandparents were William and Mary (née Hutchinson) Simcoe.

He was educated at Exeter Grammar School and Eton College. He spent a year at Merton College, Oxford; he was then admitted to Lincoln's Inn, but decided to follow the military career for which his father had intended him. He was initiated into Freemasonry in Union Lodge, Exeter on 2 November 1773.

In 1770, Simcoe entered the British Army as an ensign in the 35th Regiment of Foot, and his unit was dispatched to the Thirteen Colonies. Later, he saw action in the American Revolutionary War during the Siege of Boston. After the siege, in July 1776, he was promoted captain in the 40th Regiment of Foot.[7] He saw action with the grenadier company of the 40th Foot in the New York and New Jersey campaign and the Philadelphia campaign. Simcoe commanded the 40th at the Battle of Brandywine on 11 September 1777, where he was wounded. Legend has it that Simcoe ordered his men at Brandywine not to fire upon three fleeing rebels, among whom was George Washington.

In 1777, Simcoe sought to form a Loyalist regiment of free blacks from Boston but instead was offered the command of the Queen's Rangers formed on Staten Island on 15 October 1777. It was a well-trained light infantry unit comprising 11 companies of 30 men, 1 grenadier, and 1 hussar, and the rest light infantry. The Queen's Rangers saw extensive action during the Philadelphia campaign, including a successful surprise attack (planned and executed by Simcoe) at the Battle of Crooked Billet.

In 1778, Simcoe led an attack on Judge William Hancock's house during a foraging expedition opposed by Patriot militia. The attack killed 10 militiamen in their sleep and wounded five others. William Hancock was also killed, although he was not with the Americans. The attack took place at night and with bayonets. On 28 June of that year, Simcoe and his Queen's Rangers took part in the Battle of Monmouth, in and near Freehold, New Jersey.

On 31 August 1778, Lieut. Col. Simcoe led a massacre of forty Native Americans, allied with the Continental Army, in what is today the Bronx, NY. This place is known as Indian Field in Van Cortlandt Park, Bronx. NY.

On 26 October 1779, Simcoe and 80 men launched an attack on central New Jersey from southern Staten Island known as Simcoe's Raid, from what is known today as the Conference House, resulting in the burning of Patriot supplies inside a Dutch Reformed Church in Finderne, including hay and grain; the release of Loyalist prisoners from the Somerset County Courthouse; and Simcoe's capture by Armand Tuffin de La Rouërie.

Simcoe was released at the end of 1779 and rejoined his unit in Virginia. He participated in the Raid on Richmond with Benedict Arnold in January 1781 and was involved in a skirmish near Williamsburg and was at the Siege of Yorktown. He was invalided back to England in December of that year as a Lieutenant-Colonel, having been promoted in March 1782.

Simcoe wrote a book on his experiences with the Queen's Rangers, titled A Journal of the Operations of the Queen's Rangers from the end of the year 1777 to the conclusion of the late American War, which was published in 1787. He served briefly as Inspector General of Recruitment for the British Army, from 1789 until his departure for Upper Canada two years later.

Perhaps Joshua Peck was a misunderstood man, who had packed a lot into his early years.

Was he sold for $10 to the captain of the ship?

Was he indentured to his family on their agricultural property for 8 years?

Was he hoodwinked by the declaration that all servants would be freed?

Did he swap sides from the Continental Army to the English army?

Was he taken prisoner? And returned to England?

Was he on the Ship “Jersey” which was scuttled in New York in 1783, as the record suggests?

Or was he repatriated after his 8 years servitude was complete?